Article by Manya Mehra. This article was originally published on ibuildnew.com.au and has been reproduced here with permission.

New data from property research firm CoreLogic shows Australian home values have risen by 2.1 per cent in the month of February. This reflects the largest month-on-month increase in CoreLogic’s national home value index since August 2013. The median property price for the country as a whole is now sitting at $598,884.

“Housing values are rising across each of the capital cities and the rest of the state regions, demonstrating the diverse nature of this housing upswing”, says CoreLogic’s research director, Tim Lawless.

“Spurred on by a combination of record-low mortgage rates, improving economic conditions, government incentives and low advertised supply levels, Australia’s market is in the midst of a broad-based boom”, CoreLogic notes in its release.

Lawless also predicts it won’t be long until both cities eclipse record highs set in 2017.

“Both cities are still recording values below their earlier peaks, however at this current rate of appreciation it won’t be long before Australia’s two most expensive capital city markets are moving through new record highs.” 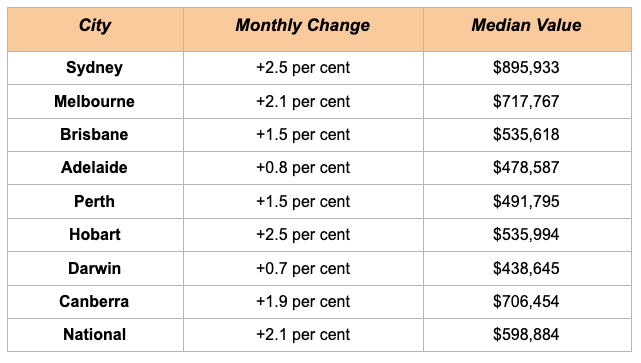 If you have any questions about buying new and off the plan property, including house and land packages, townhouses and apartments, please don’t hesitate to call our friendly team today on 1300 123 463.

PREV NEXT
Published on 4th of March 2021 by Michelle Leftwich